So as my big 3-0 approaches in September 2014, and my boyfriend’s birthday only being 3 days apart from mine (same year, too), we thought we would celebrate by going to Disneyland or Disney World.  We are both huge fans of animation and Disney, so it only seemed appropriate.  And then, somehow, a few months later – we find ourselves in Disneyland after a sudden decision to go after seeing a good flight deal for May.  Why not!!  Calgary was still brown, we were tired of the same old scene so we decided to pack our bags and head out for our first Disney adventure ever.  It wouldn’t be any exaggeration to say I’ve basically been waiting for this my whole life.

Disneyland didn’t disappoint.  Holy crap, I didn’t realize such fluid animatronic technology existed.  Each section of both parks were packed, but our wait times for rides never seemed very long – of course we used FastPass as often as possible.  I honestly don’t think I’ve ever walked so much in my whole life… and was really thankful my shoes didn’t blister my feet.

We managed to accidentally get one of the last FastPass tickets for the Cars ride – at around 10:00am they were already reserving tickets for 8:00-9:00pm rides!  By accident, I mean we walked right by the FastPass area and the only reason we even noticed was because of a staff member shouting about getting the last FastPasses of the day for this particular ride.  We came back at the appointed time only to be met with a ride that was having difficulties and were told we’d have our passes honored for the following day.  By this time, it was getting close to the World of Color showing.  As we approached the viewing area, there were literally no spots left but we attempted to view the show at an off angle.  My boyfriend being a giant, he was able to see the show better than I, who was using her camera pointed as far as my arms can reach upwards with the LCD pointing downwards so that she could even see a single thing.  Either way, we quickly gave up that idea as my arms started going limp at around the 7 minute mark, but my mind was made up – that this was something I needed to experience in the best way possible. We decided our goal for the follow day (and our last day) was to get FastPass to this show as soon as the park opened.

So we did. We lined up more than an hour before the show started to get the best seats, which actually means we were in the “you will get wet” area.  And we did – the winds directed the high shooting fountains our way as the front liners screamed whenever the wind would pick up.  Our one relief being the part of the show with the Pirates of the Caribbean pyrotechnics working full blast, and all of us reaching towards the fire to warm up as much as possible after being dowsed.

It may have been the getting cold while being sprayed on during this show, but I’m pretty sure it was just the show itself that gave me goosebumps while watching the 30 minute eyegasm.   Being so close to the danger zone, I didn’t take any photos or videos of the show itself however I took a few frames of our view while we waited for the show to start.  After all, we were pretty sure someone out there had a high quality of the show on YouTube – and of course they do. 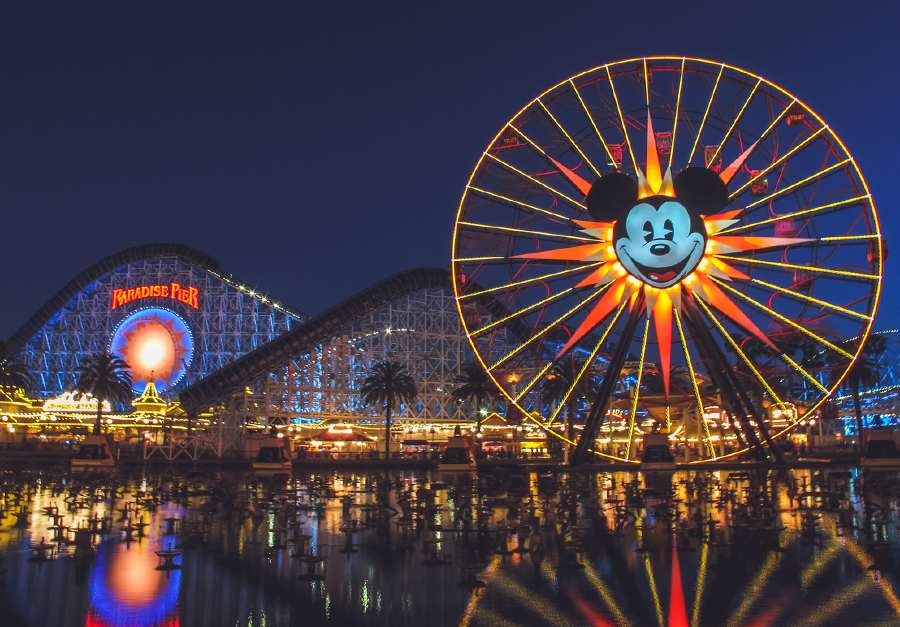