What a wonderful thing to see in my inbox this morning from Weddingbells!  Melissa and Kyle‘s awesome Saskatoon Farm wedding was featured today on Weddingbells; you can read all about it by clicking here to the Weddingbells website. 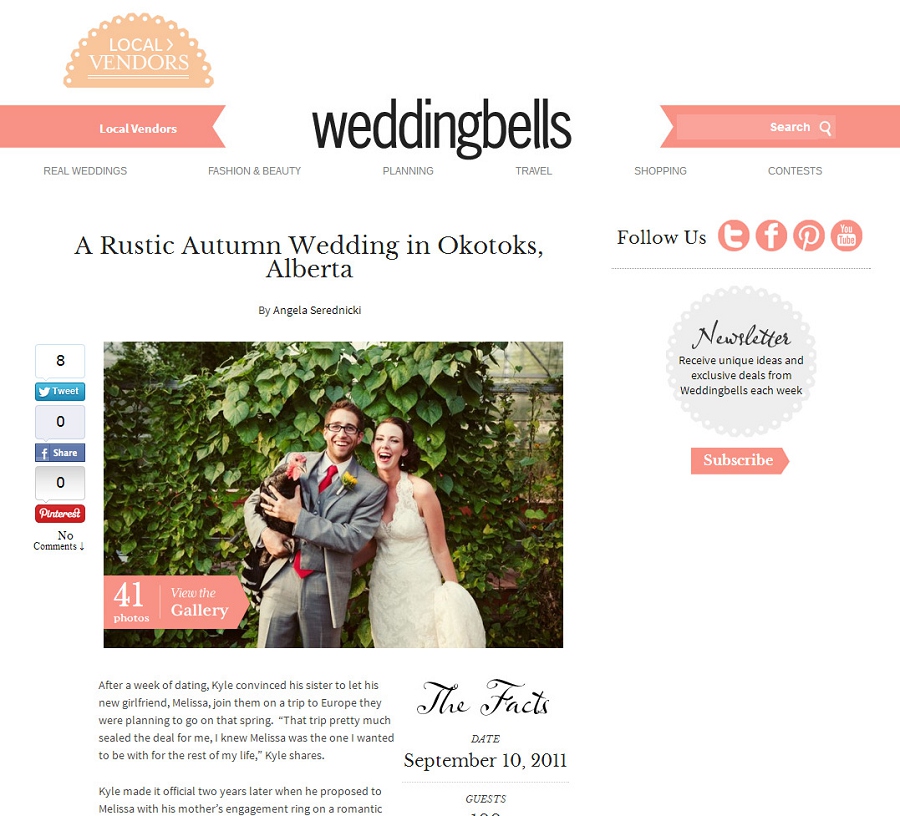 Weddingbells briefly describes Melissa and Kyle’s story; here’s an in-depth story of their super cute engagement, as told by the bride and groom in their Weddingbells submission!

So sometime in July 2010 Kyle & Melissa noticed that Kyle’s Mother Gail was wearing a new ring shaped like a rose. Melissa immediately fell in love with it and asked Gail about it. Gail explained that the ring was from her Marriage to Kyle’s father Bodahn (Bo); Bo had been going to university and couldn’t afford to buy Gail an engagement ring so Gail (who was working at a jewellery store) purchased the ring for herself. Being that it had now been almost 20 years since they had separated and there were no bad feelings between them Gail had decided to start wearing it again. She paid for the ring, she loved the ring, & there were no hard feeling regarding the ring so why not wear it. Well the next week Kyle asked Gail if she didn’t mind he would like to borrow her ring and see if a Jeweller could replicate the ring because he wanted to finally purpose to Melissa and no other ring would suffice, Gail of course agreed. The next day Gail called Kyle back and told him that instead of trying to have her ring replicated she thought it would be better that he have the original ring, she was happy to have something passed down to the next generation of her family. After Kyle received the ring, had it cleaned up a little, told all his best friends about the ring, & received permission from Melissa parents, the day had finally come…Friday August 13, 2010. While driving from Kyle’s parents’ house down to Kensington to get some dinner Kyle suggested to Melissa they stop off at Nose Hill for a nice sunset walk. Melissa agreed, but had an inkling that Kyle was up to something. After a nice walk Kyle suggested that they sit down to rest and enjoy the sunset. At this point Kyle is sweating bullets, so he tells Melissa to close her eyes and when he has her open them again he has the ring in his hands but no words come out. Melissa, giddy as a little school girl, had to ask Kyle which finger the ring was supposed to go onto as he had still yet to ask “the question”  After composing himself Kyle final asked Melissa “Will you marry me?” and the rest is history. (p.s. we did make it for dinner. We went to The Kensington Pub each had a pint and shared some fish & chips).

Check out Weddingbells for awesome inspiration and other Real Weddings!  I’m pretty sure that Weddingbells specifically held off publishing this article so that it coincides with their wedding anniversary.  Aww super romantic, Weddingbells!  :)