These two lovebirds are from Ottawa and were doing the impossible task of planning their wedding in Calgary.  Although they already had an engagement session done in Ottawa when they booked with me, they were convinced by yours truly to do one here in Calgary — and I’m so glad they did.  Did I mention this was just days before their wedding day?  Just nuts.  ;)

This fun summer Calgary engagement session truly embodies some of my favorite things about Calgary.  Starting in Inglewood, down to the Riverwalk, and ending at one of the most awesome historical buildings downtown (McDougall Centre).  This hot summer day would not be complete without a water fight; Peter was getting a liiiiiiittle competitive there, haha. 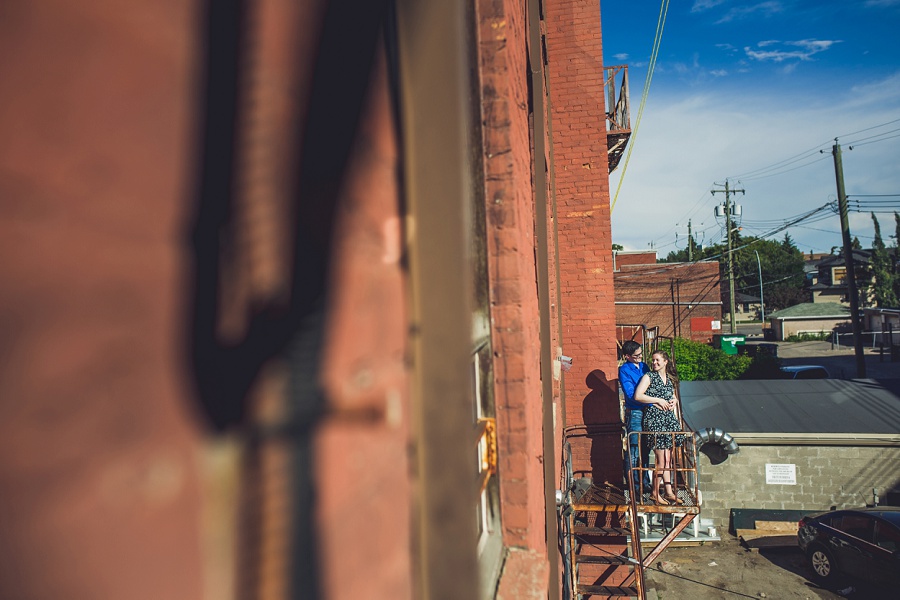 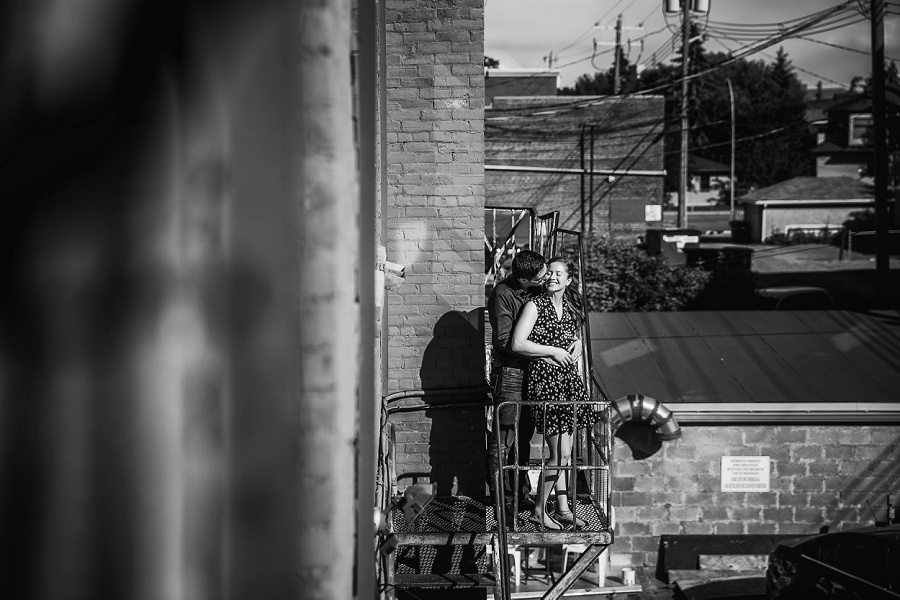 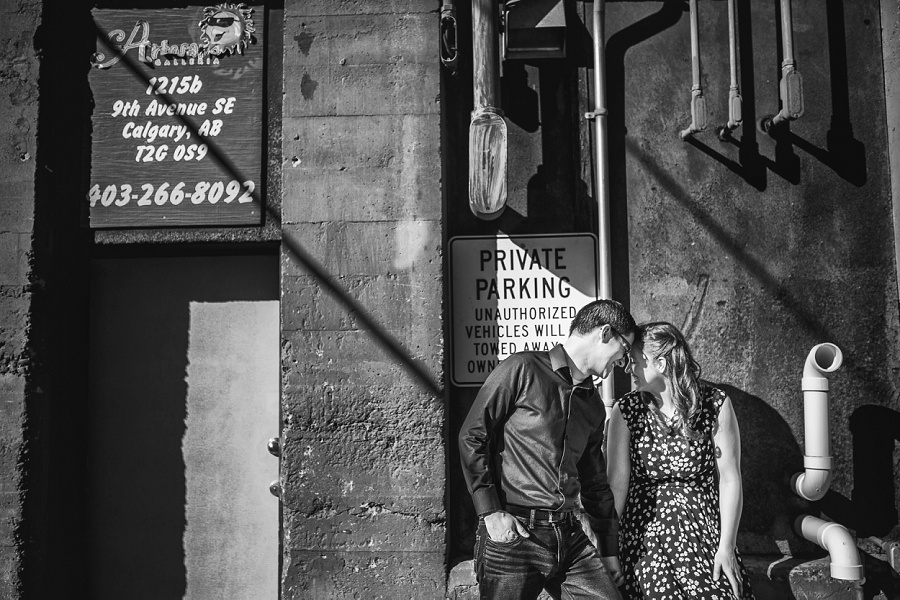 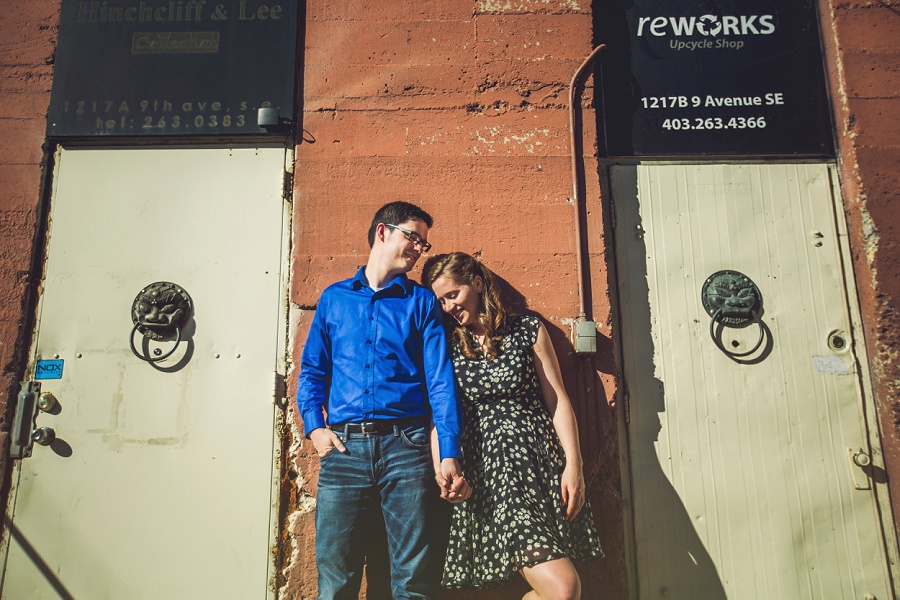 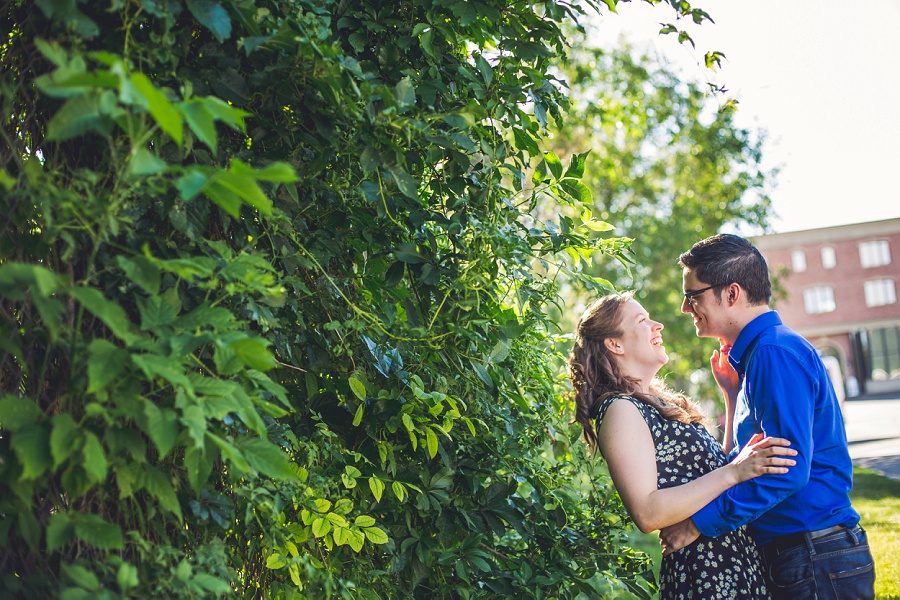 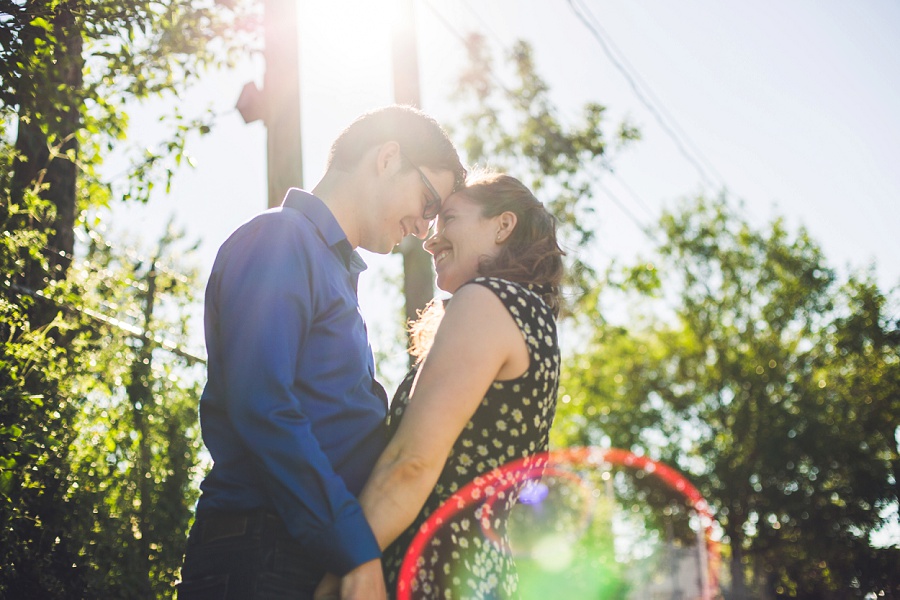 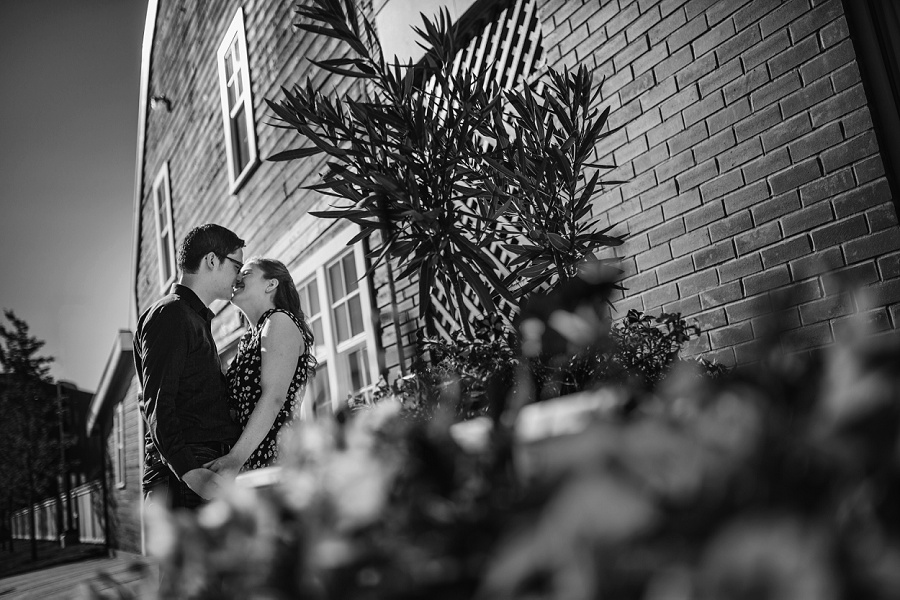 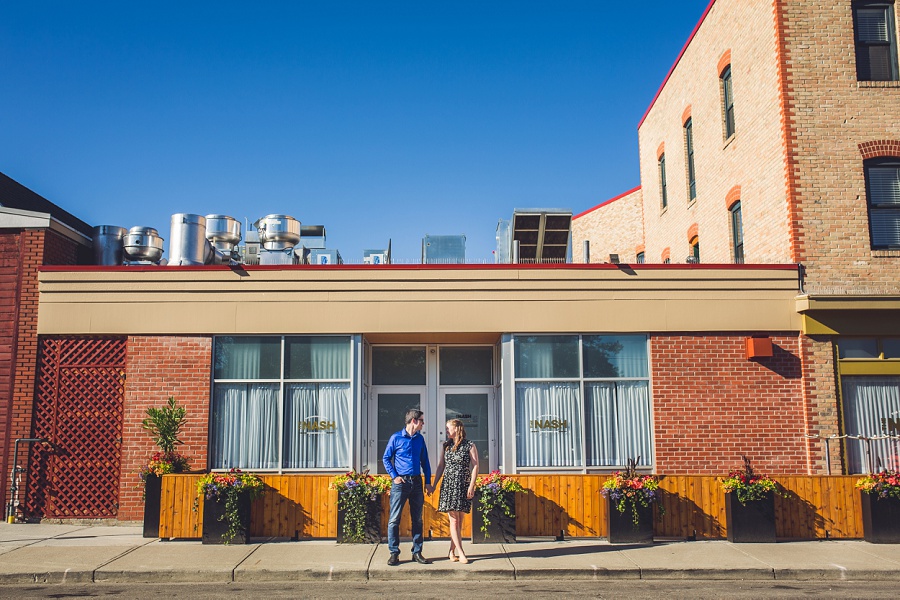 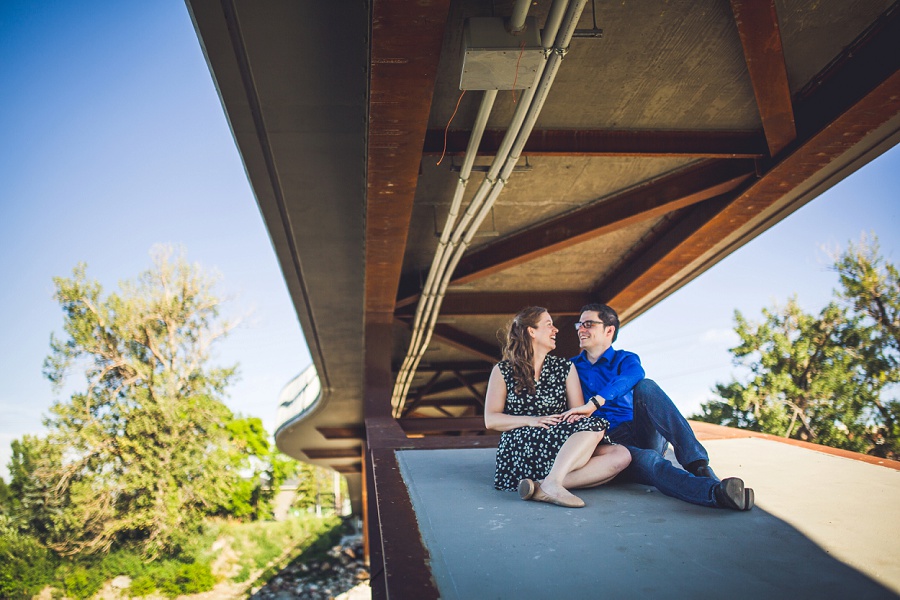 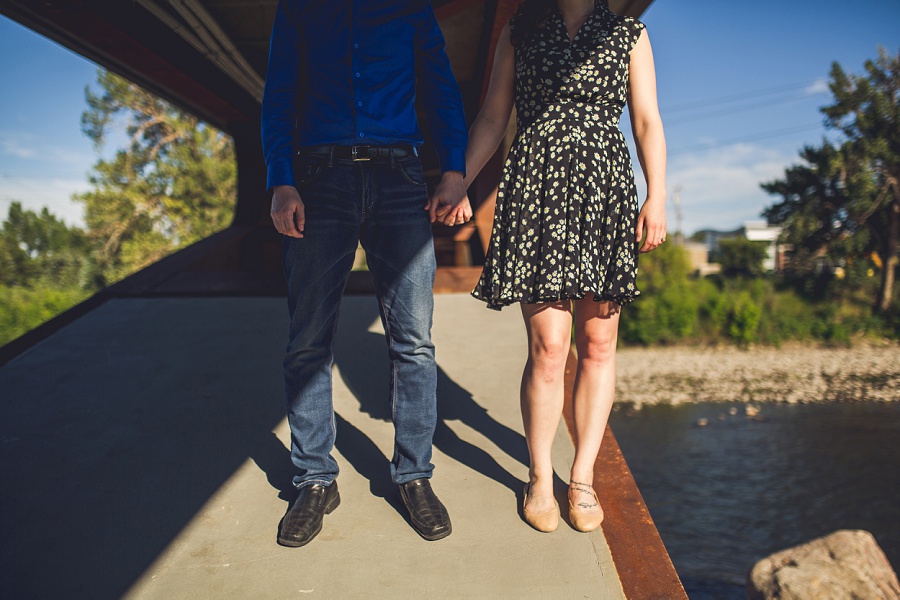 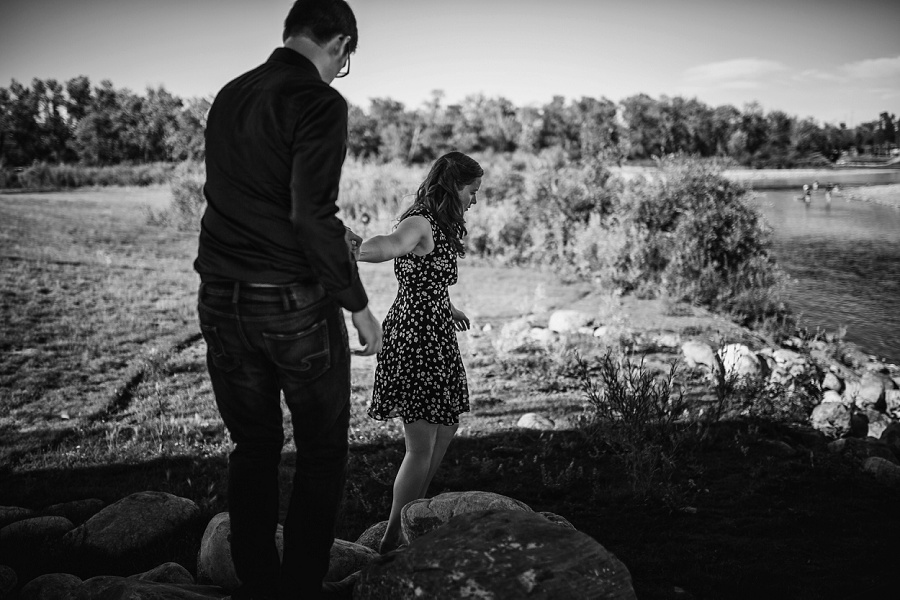 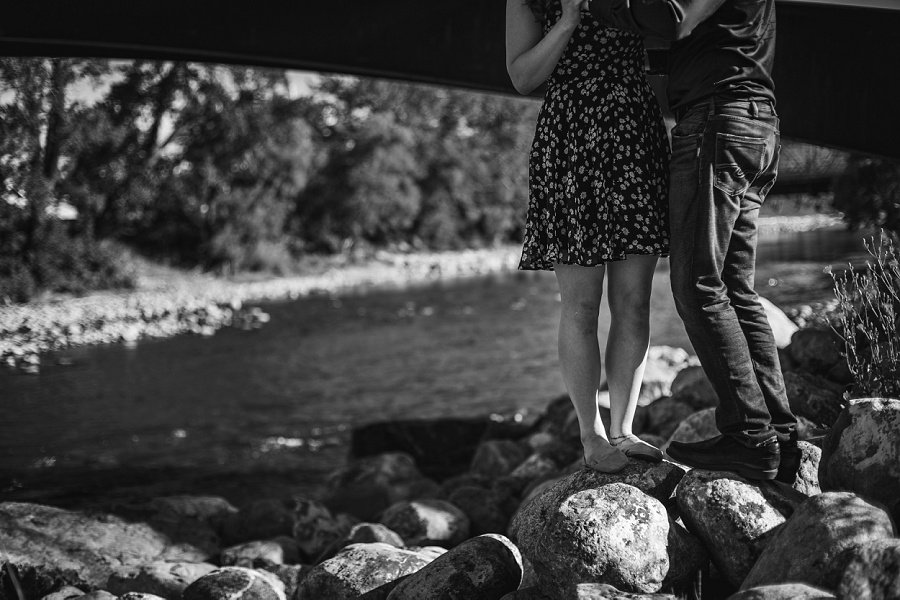 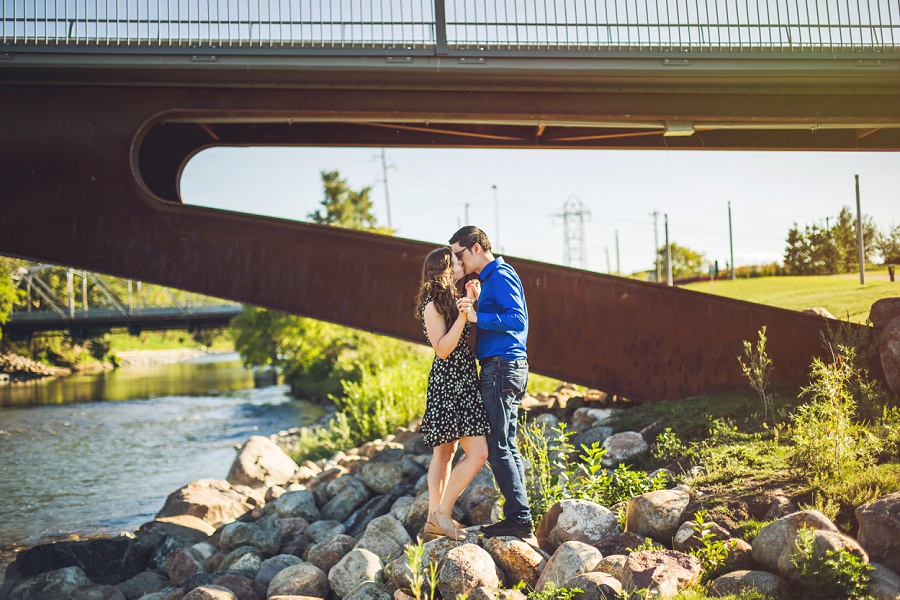 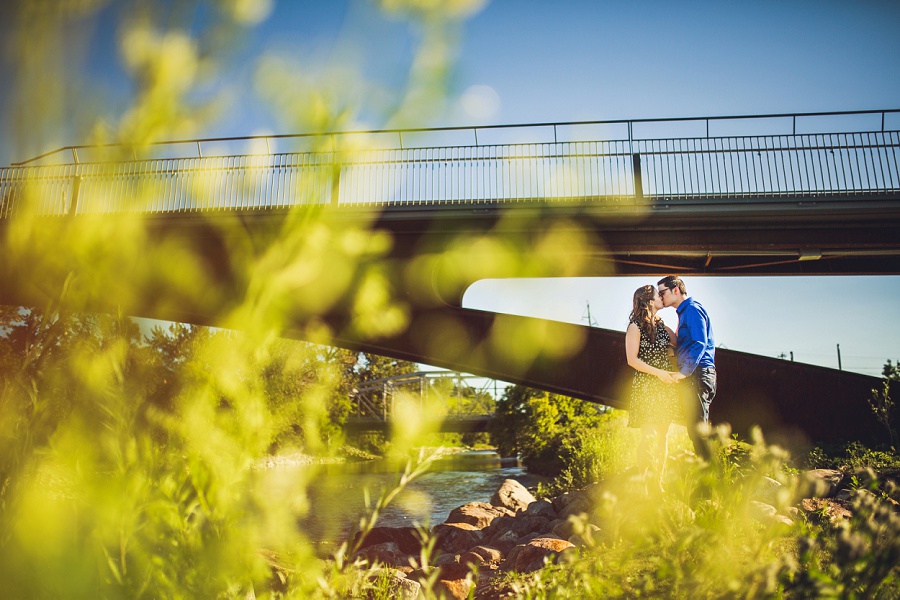 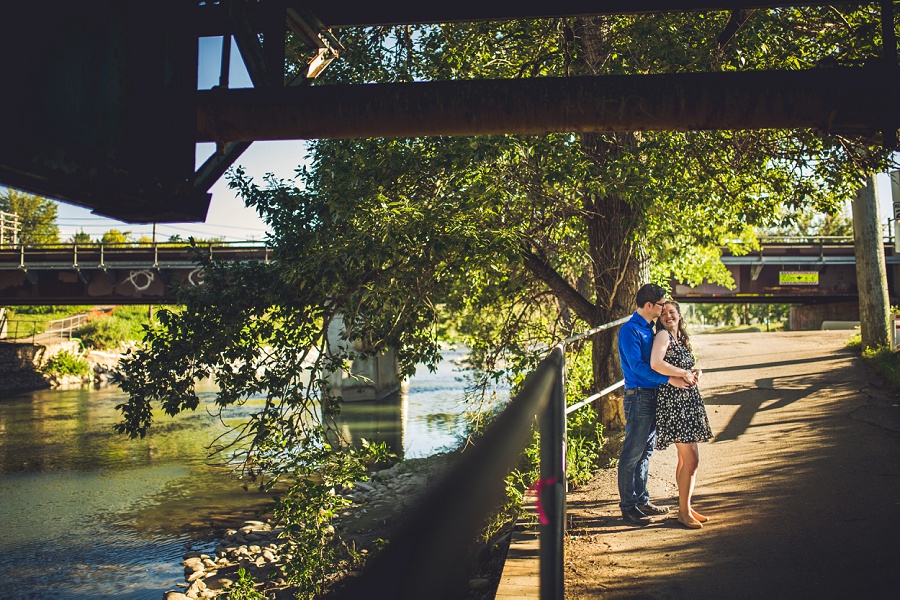 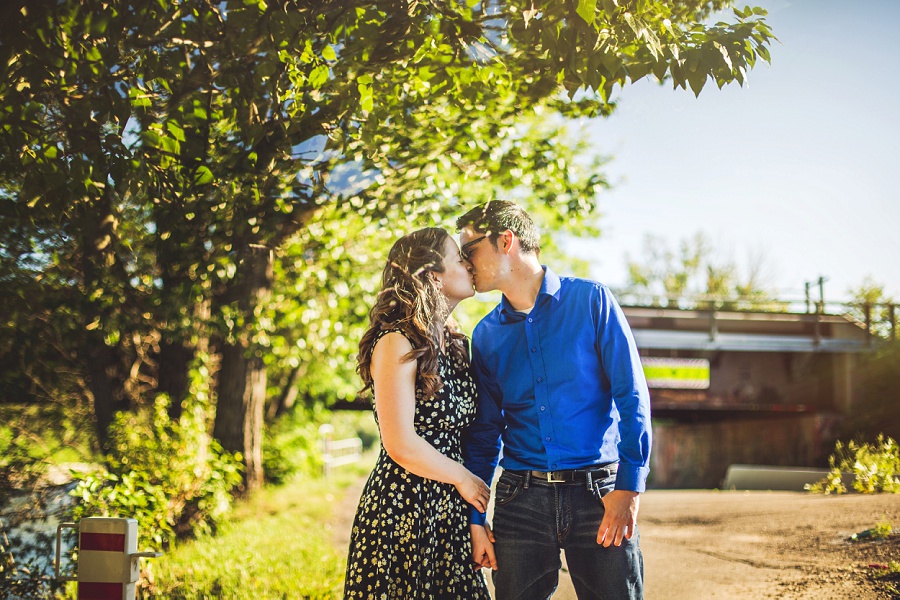 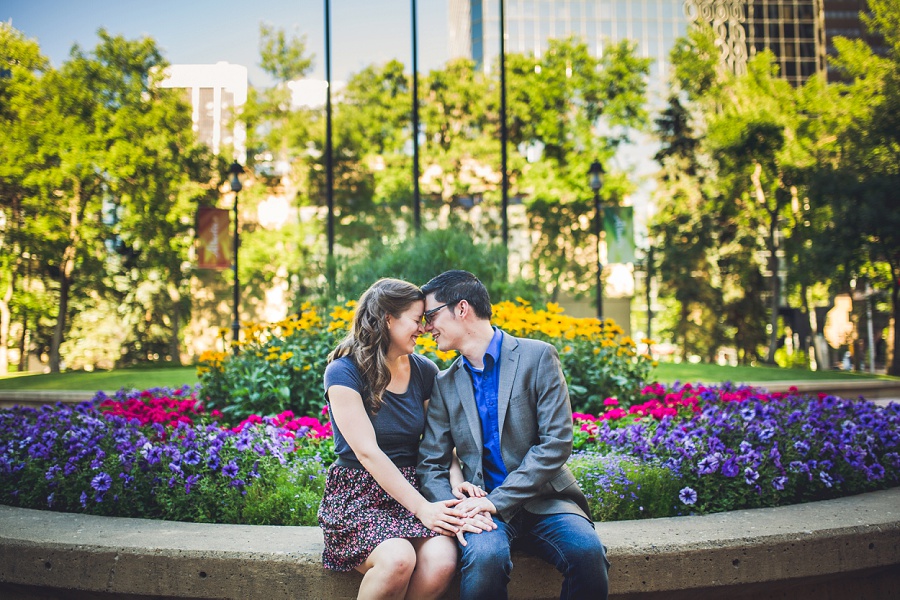 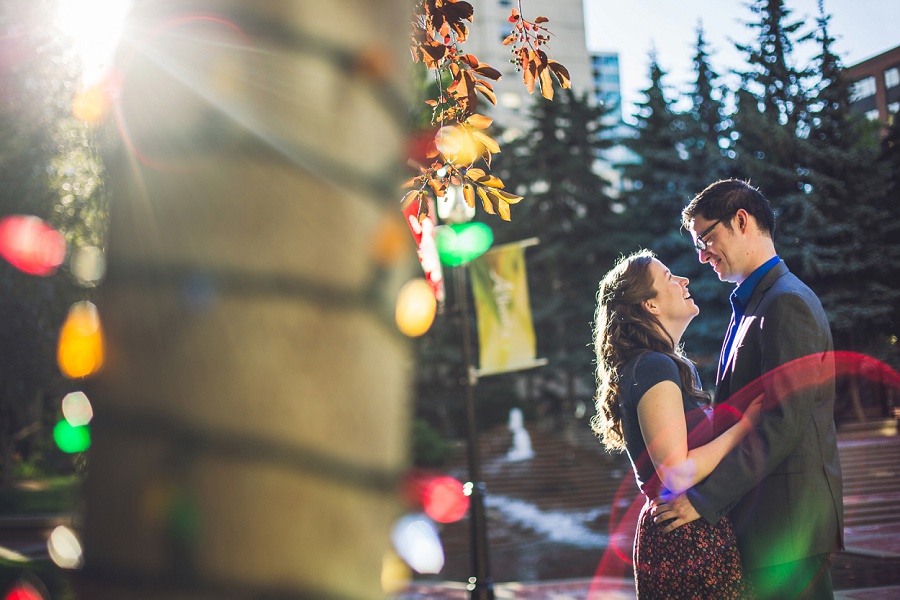 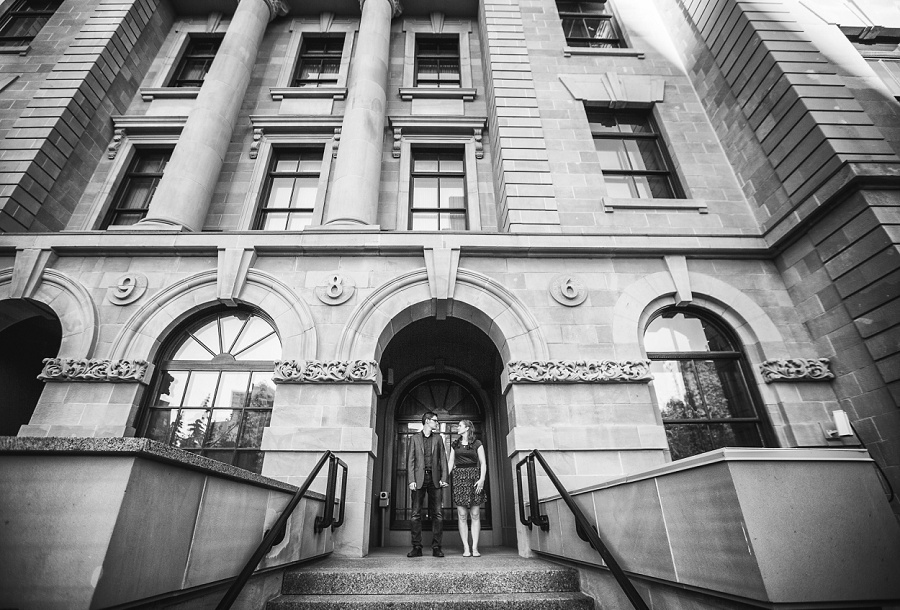 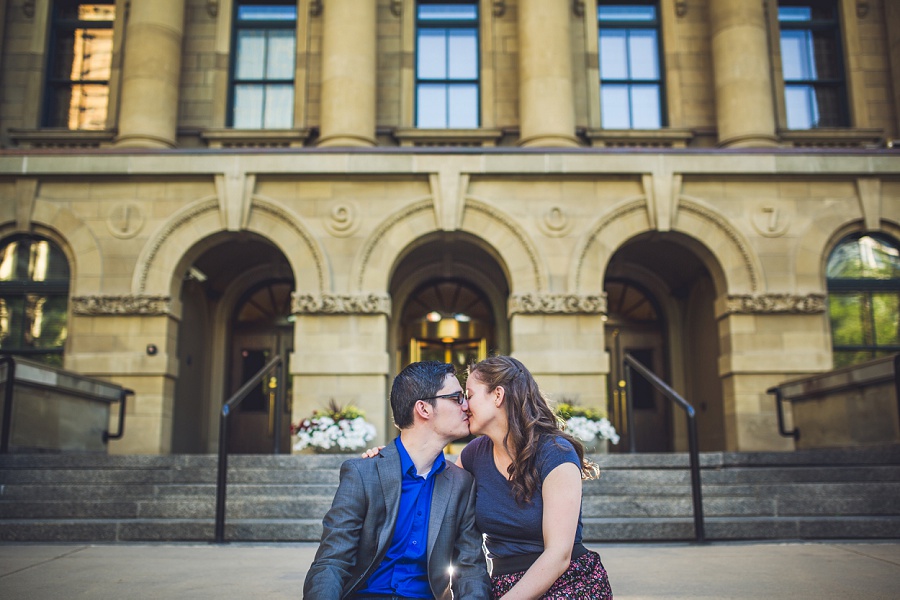 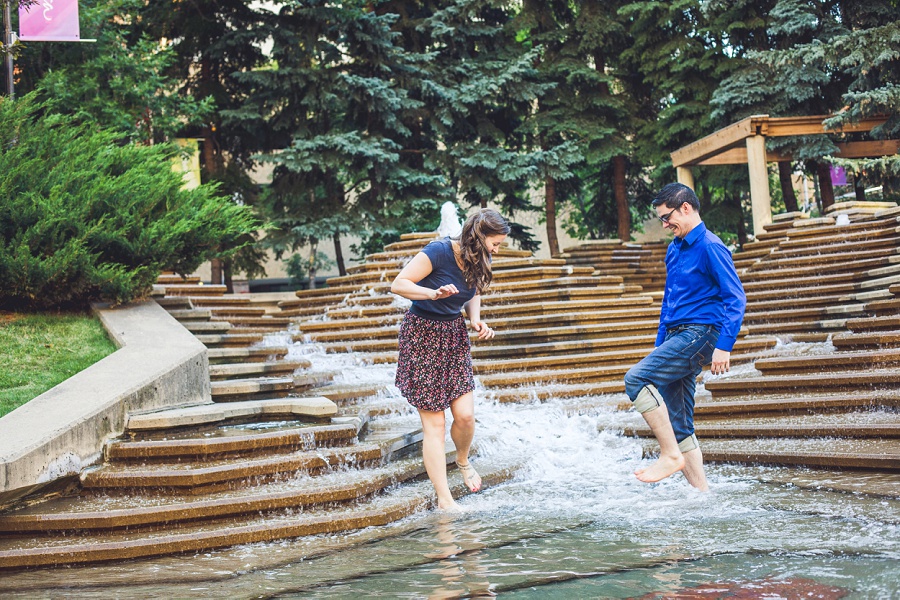 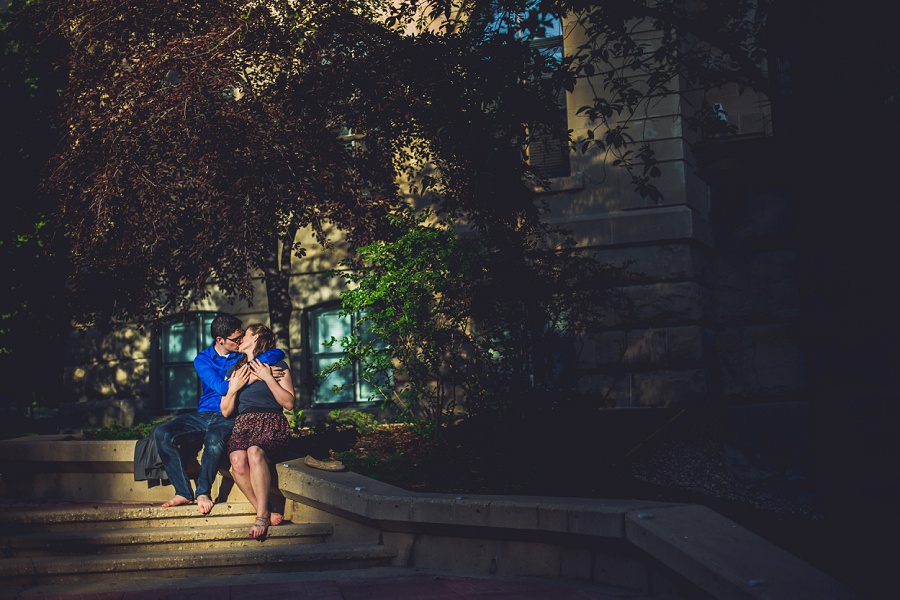 How did you two meet?
Peter: We met through work.
Veronica: We met on a snowy day in January. I remember a thousand things about that day – my first on an internship in Ottawa. I remember how cold it was, how awkward I felt in snow boots, how daunting the building seemed, that my mouth felt like sandpaper. Peter says he remembers the day only in two parts: the busy, normal day before I walked into his office, and how everything was different after. He must have told me a hundred times how he knew from the first moment he saw me that he wanted to be with me. Embarrassingly enough, in the fog of all those details, the first memory I have of him is from three weeks later. I maintain that our real first meeting happened in the office kitchen, where I encountered a tall, handsome man with clipped speech who seemed to be afflicted with as much social awkwardness as I was. While I never would have guessed I would eventually fall for and marry him at the beginning, I remember realizing very early on that, in a world where very few people merit confidence, he could be trusted.

What brings you two together?
Peter: We figured out right at the start that we both wanted all of the same things in the long-term and that we have the same values. In our time together, we like browsing old bookshops and we like outdoor activities, like hiking.
Veronica: That said, we do actually have very different taste in most of the less important things. Peter’s bookshelves are full of biographies and political books; classic literature and poetry dominate mine. He drives me up the wall with most of his eclectic music collection, which somehow manages to cover every genre but the folk music I prefer (he insists his beloved Leonard Cohen is an exception in that category… I heartily disagree). And our Netflix battles can get quite heated (“what is it with men and the Godfather?”). So we spend a lot of time being brought together in debate over competing tastes.

Share an amazing memory!
Peter: Early on, Veronica suggested that we walk to a used bookstore on the other side of town that she’d heard about. It was last summer and we walked for almost two hours to get to this place. Both of us are bookish types and in our conversations we had lamented over how most of Ottawa’s most noteworthy used bookstores had closed prior to either one of us having arrived here. We had some fantastic conversations and got to know each-other rather well as a result. As fate would have it, this bookstore had closed too and was no longer there, replaced by a used vinyl shop (which, for the record, was also a grand discovery). But it was an absolutely fantastic day all the same, and the first of many top-notch days during which we did nothing but talk.
Veronica: That pun up there, about the records? It was little things like that that first made me take notice. Though he barely said more than “noted” to me for the first couple of months (I kid you not), I would occasionally overhear interactions he had with other coworkers across the office wherein, to my surprise, he was the one making people laugh. As I discovered that this shy man’s few words were more often than not just the right ones, I knew it would be worth the effort to get to know him.