I was just introduced to a new compact camera from this company called Light, that allows you to edit pictures right on your camera to affect the depth of field. This photo was submitted for their #VantagePoint project. The project entails submitting a favorite image from a favorite location, and to talk about the steps taken to create the image.  This made me think how infrequently I ponder over a single image due to the sheer volume of images that I produce and go through, even for a single project, so it was a really interesting task and I enjoyed the challenge to focus on finding one image to talk about.

It was a difficult choice, to narrow down thousands of images to just a single shot for examination.  In the end I decided to go with an image that I typically get a lot of feedback on, and one that I have a story about.  The image I chose was from Courtney and Scott’s engagement session in the Canadian Rocky Mountains. 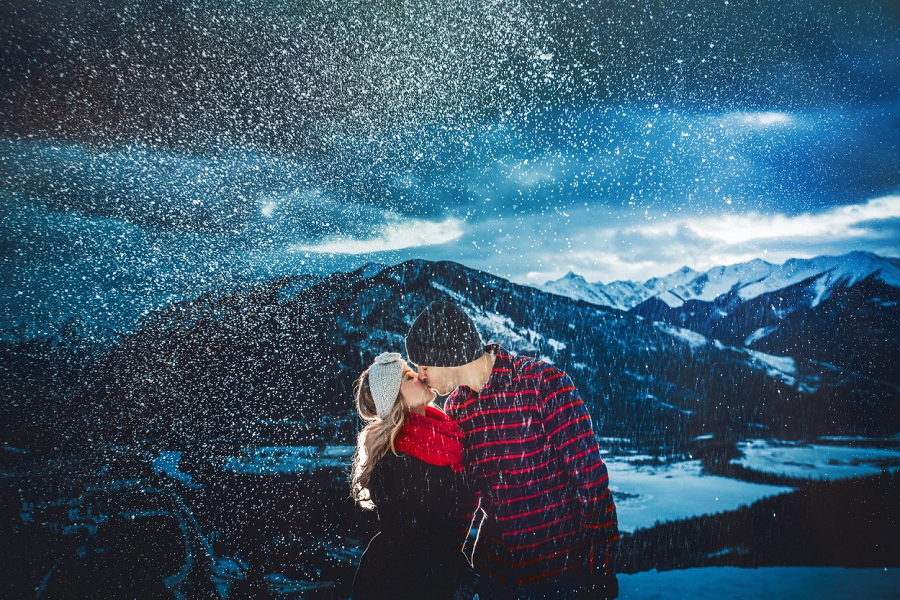 2015 was an interesting year in that I had a lot of brides and grooms that were planning their Calgary weddings but were not living in Calgary. Sometimes the couples weren’t even in Canada; such was the case for these two Californians.  It was also interesting in that, despite how winter-y the above image looks, it was an incredibly warm winter that yielded almost next to no snow.  Some might celebrate that fact, but for photography, it was challenging!  Whenever you think of engagement photos in the winter, chances are the types of shots you’d imagine would include: snow, building snowmen, tobogganing, a blanket on top of the snow and enjoying a hot cup of cocoa… see the pattern here?  Snow was absent, leaving Calgary and surrounding area in a brown muck with dead trees.  Truly not very picturesque or romantic for winter nature photography.

This was particularly daunting for my out of town couples that were visiting Calgary to have their engagement photos done.  Their visit time is limited, and of course, I have no control over the weather (as nice as that would be).  Thankfully, Calgary is close to some amazing mountains where the weather is typically cooler and more likely to have snow, particularly on the mountain peaks — that snow starts even months before winter officially rolls by.  I set out to Canmore in hopes of showing this beach couple something totally different.

Lucky for us, Canmore did have more snow than Calgary… but it was a pretty small amount.  Nonetheless, I took Courtney and Scott to one of my favorite vantage points (pictured above) close to the peak of Mount Norquay.  It’s an amazing view of the valley leading to Banff, which I often coin as the “postcard view” of the area.  It wasn’t snowing when we got up there, which ended up working to our advantage as it gave us a clear view of the valley for a couple of photos leading up to this one.  Courtney and Scott happened to bring their lovely dog, Nala, to Canada with them and Nala joined us for a few photos as well.  Courtney’s friend was there to help with taking care of Nala during the photos where she wasn’t involved, and I also had my husband, Tom, come with us to help assist me during the photo session.  With the combined efforts of Tom and Courtney’s friend, they gathered up snow in their hands to throw into the frame to create the falling snow as shown in the photo.  Behind Courtney and Scott was a single bare flash to illuminate the couple as well as all of the falling snow.  The setup was quite simple, but it took many tries to get the snow falling right — ultimately this was my favorite shot from that sequence!

Of course, I applied my standard color treatment in Lightroom as well as upping the sharpness and highlights on the areas with the snow to make them stand out more.

It just goes to show that sometimes we can create our own luck with a little help.  :)