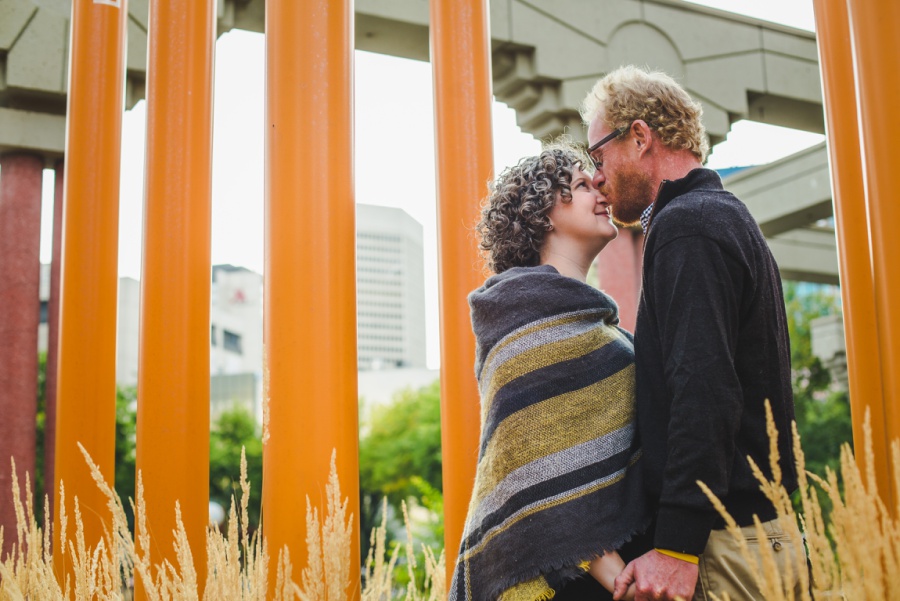 Umm, how cute are these two? Or, I should say, these four! I love when couples include their pets in their engagement photos – I’m a huge animal fan – and any excuse I can get to meet my couple’s pets is just fine by me. I really loved how Abigail and Luke used this session to celebrate their journey of moving to Canada and becoming permanent residents, which happened to be during Canada’s 150th anniversary. Such great timing! We were fortunate to have some great “Canada 150” public art at one of the parks we visited. The idea with the cupcakes and bandanas for their dogs was so cute!

I had such an amazing time with Abigail and Luke; their engagement session and wedding was truly one of the highlights of that wedding season. I can’t wait to share their wedding photos with the blog soon. Check out their amazing story below the photos! 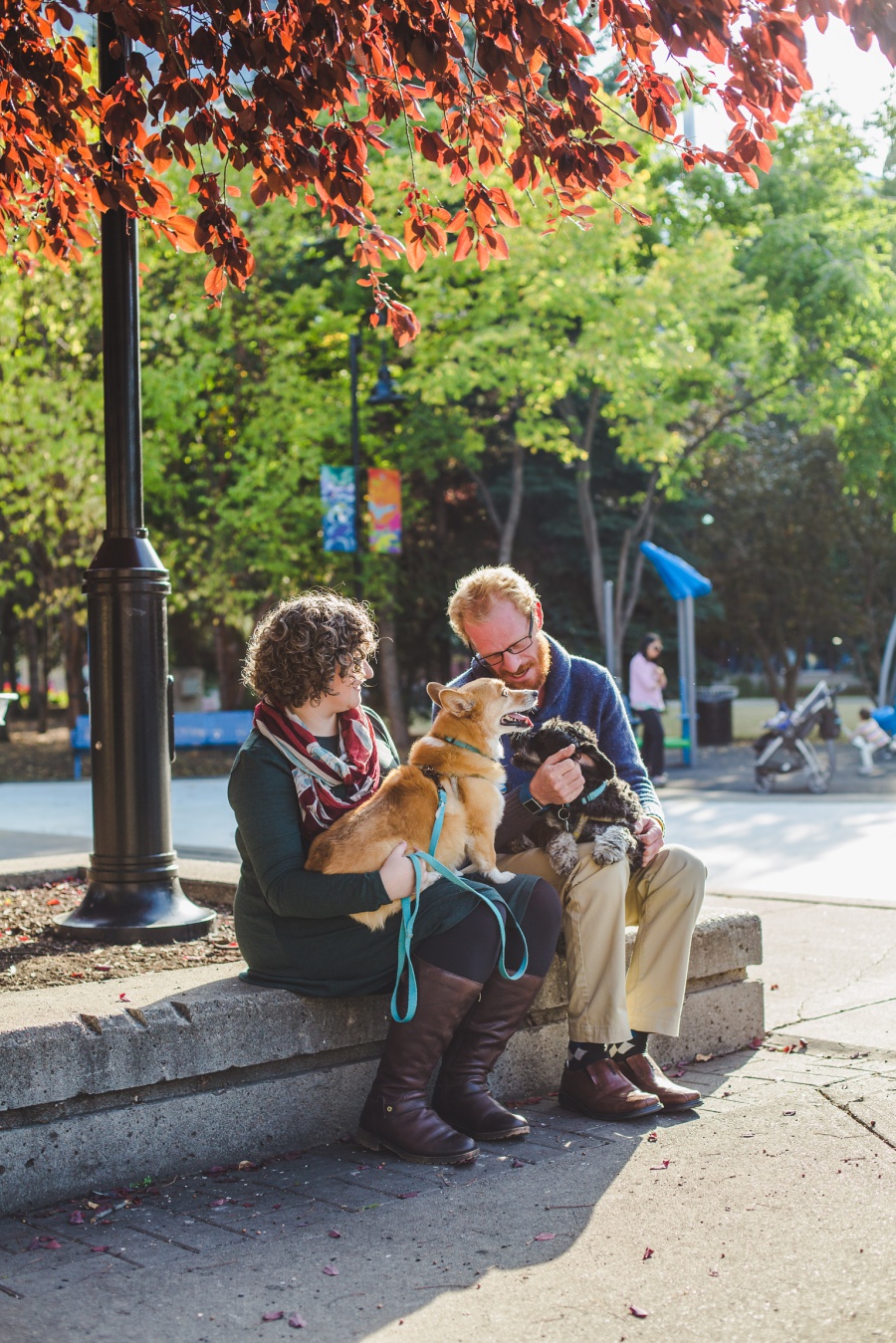 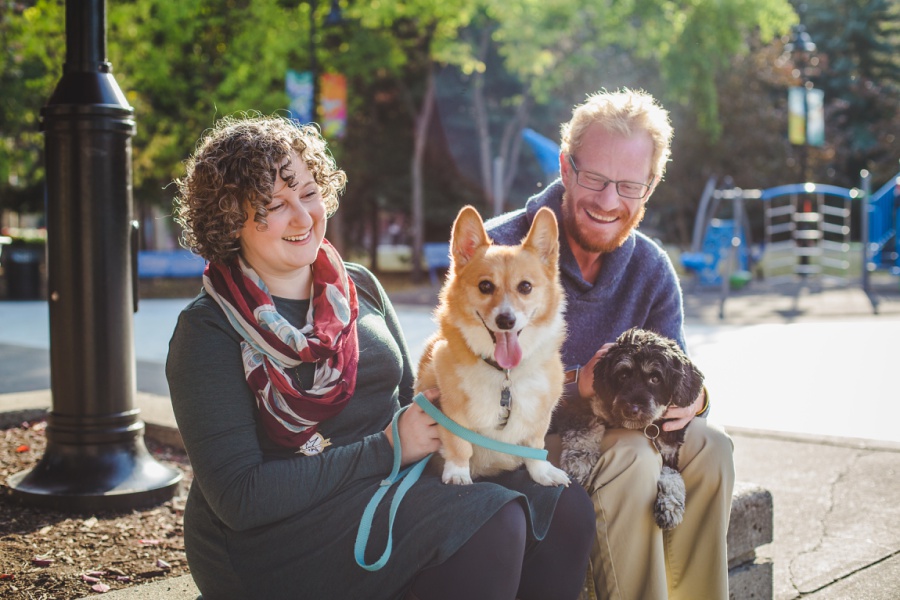 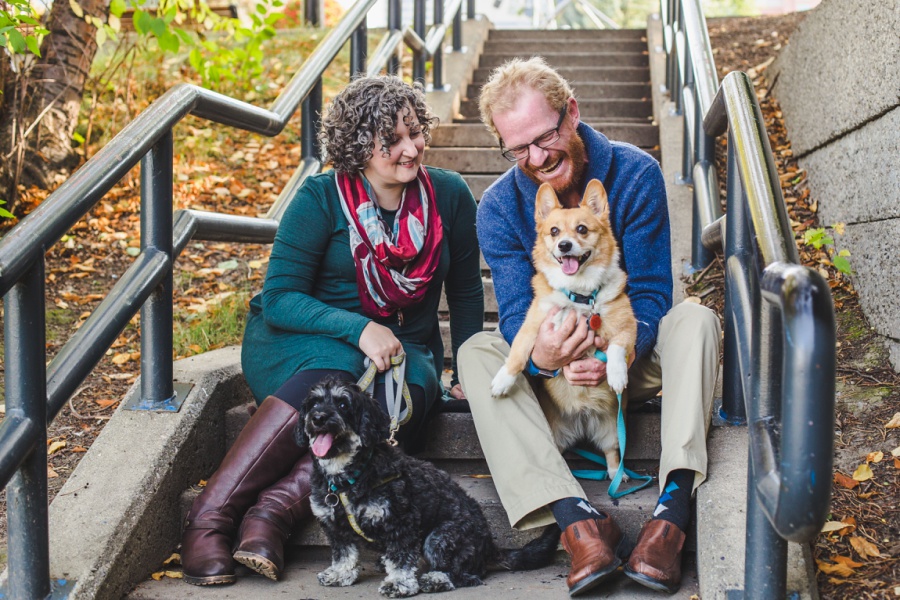 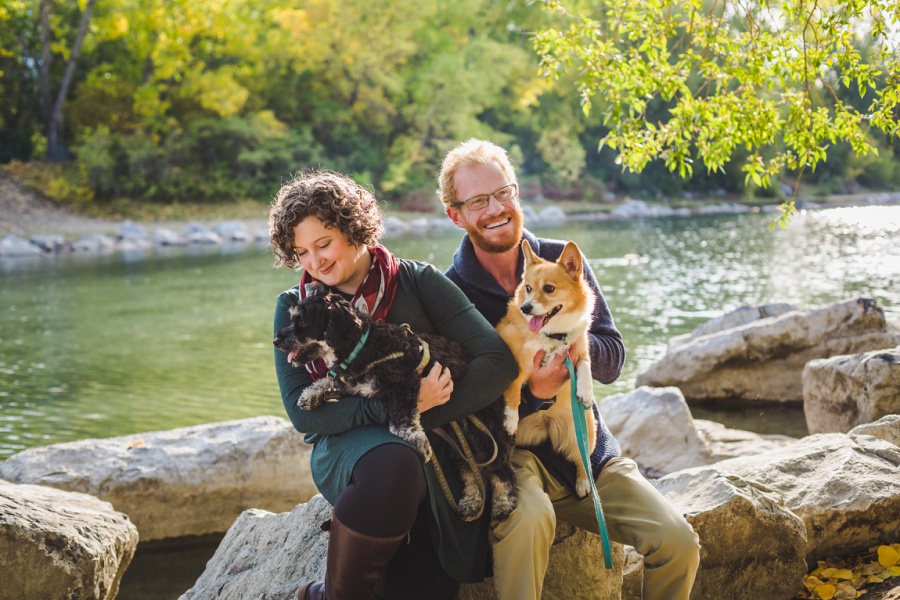 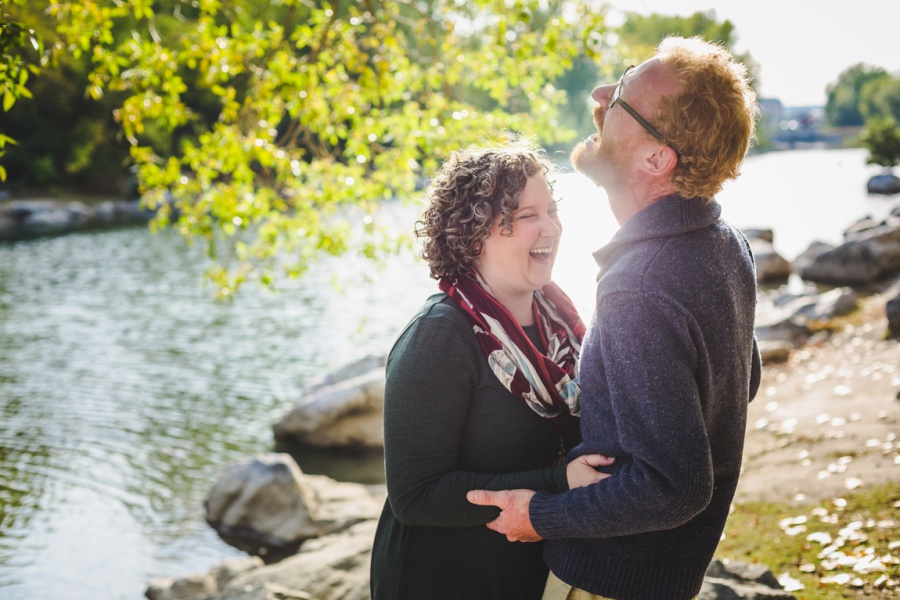 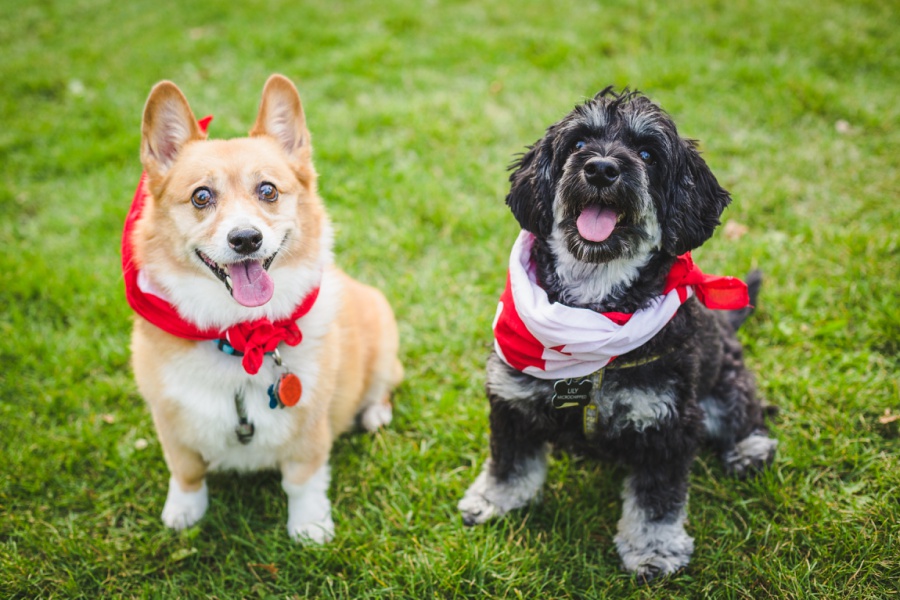 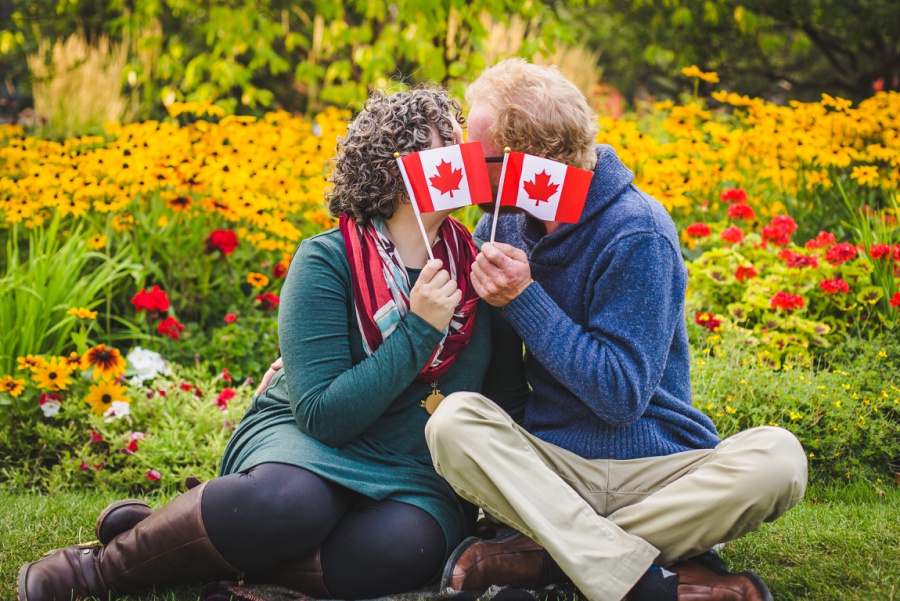 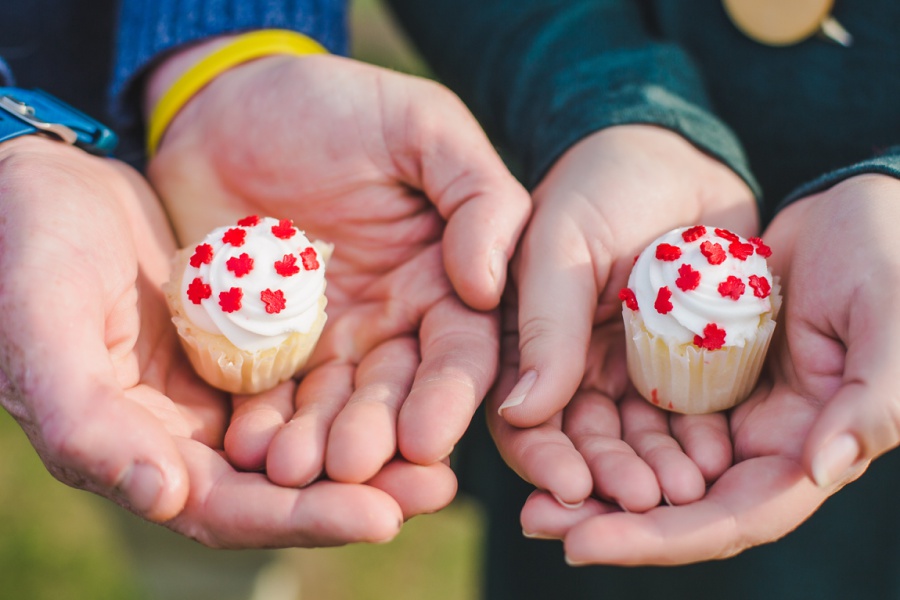 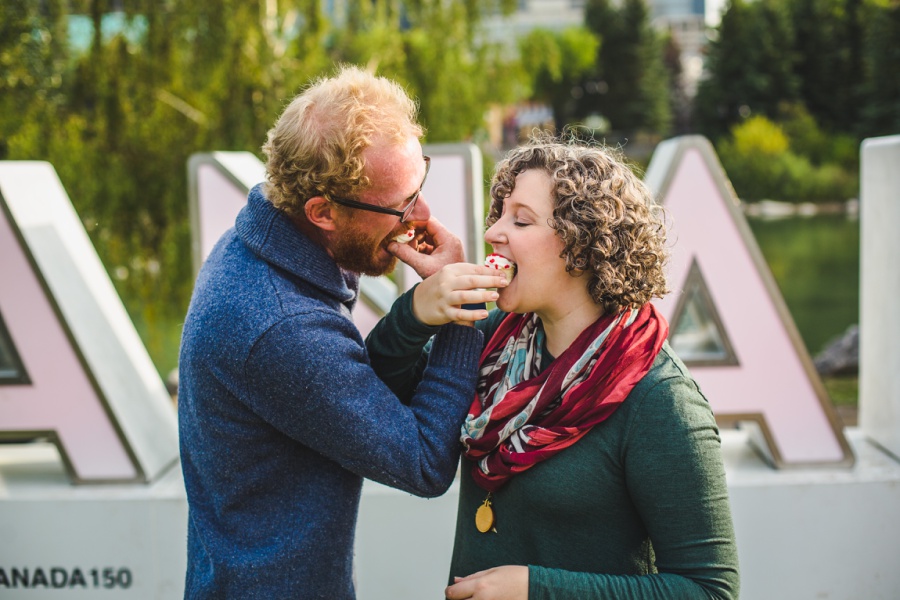 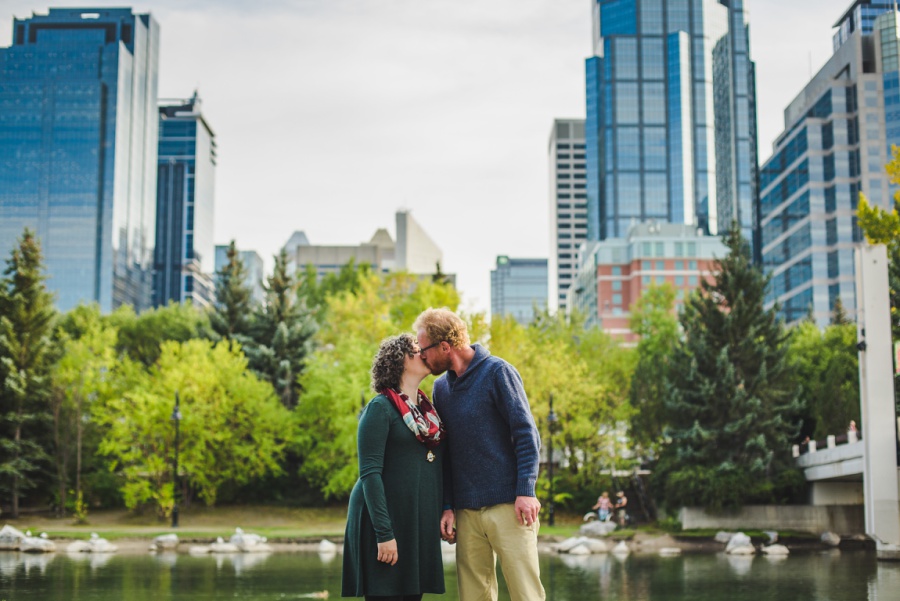 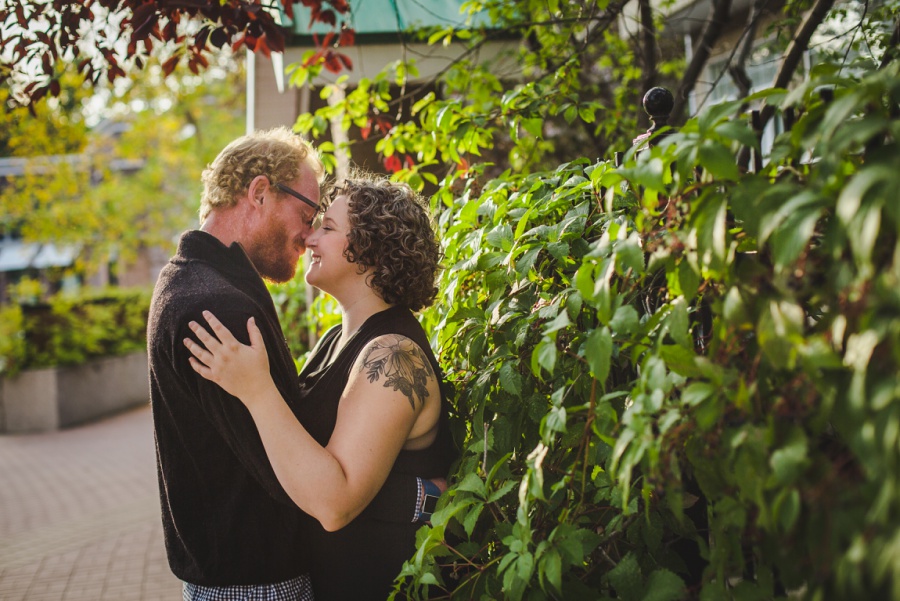 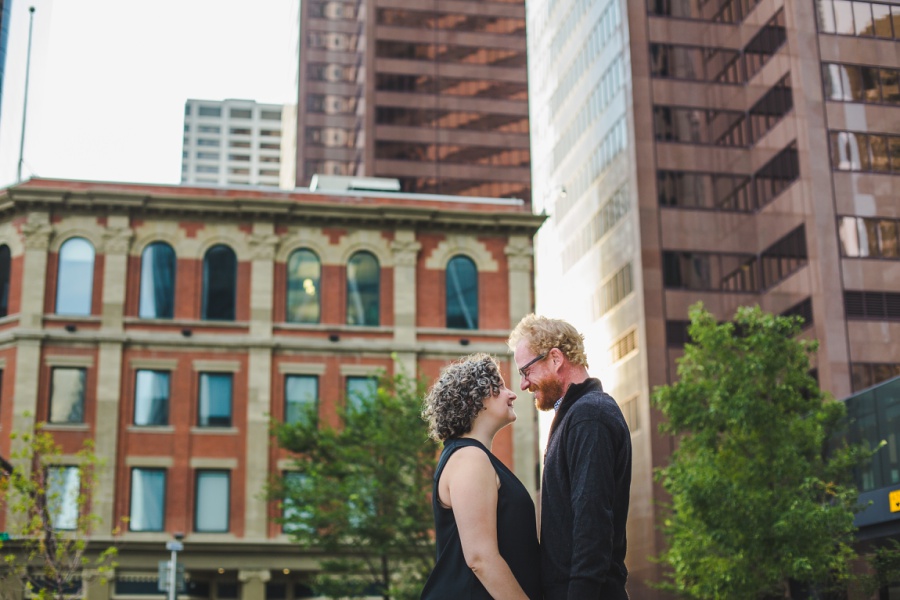 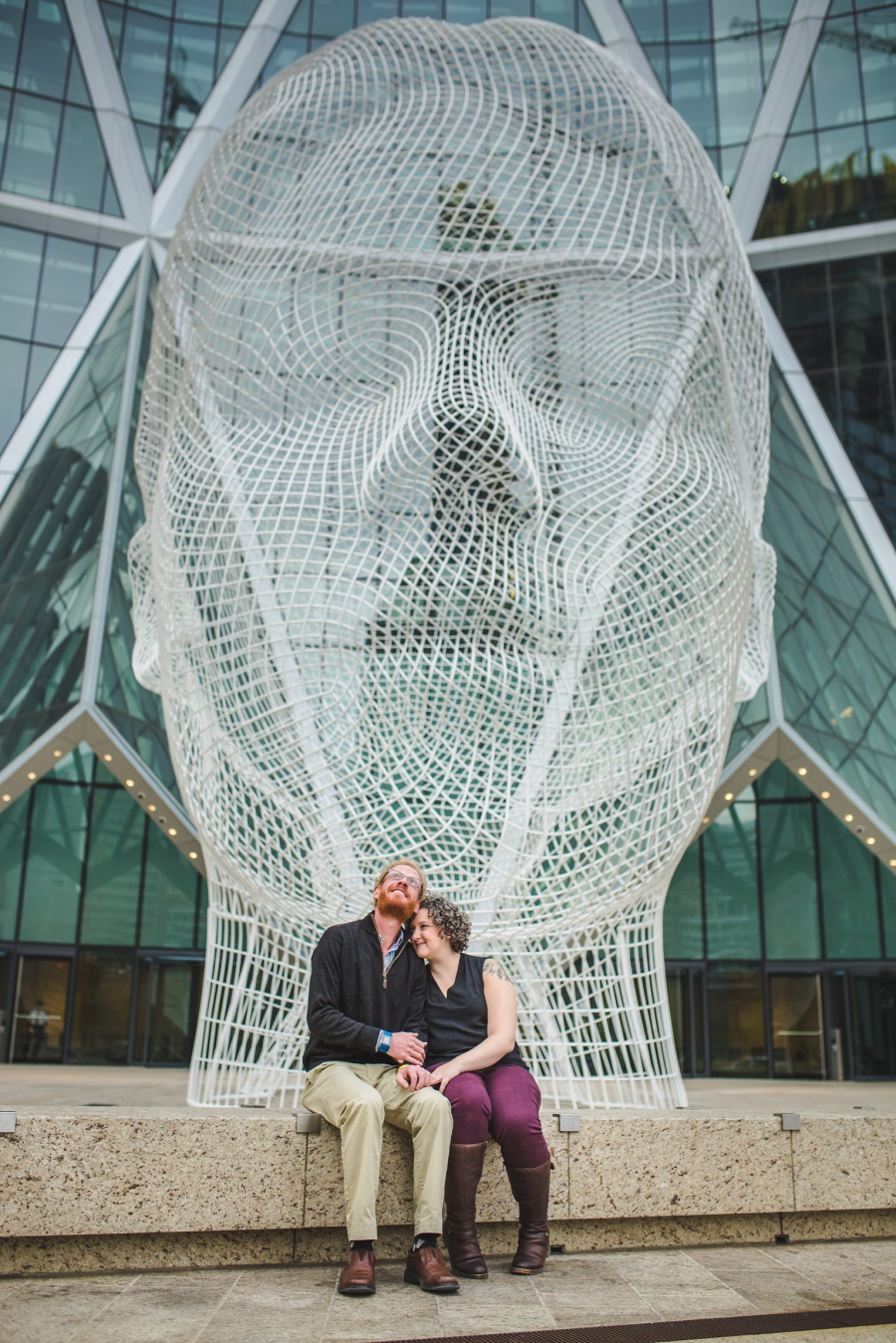 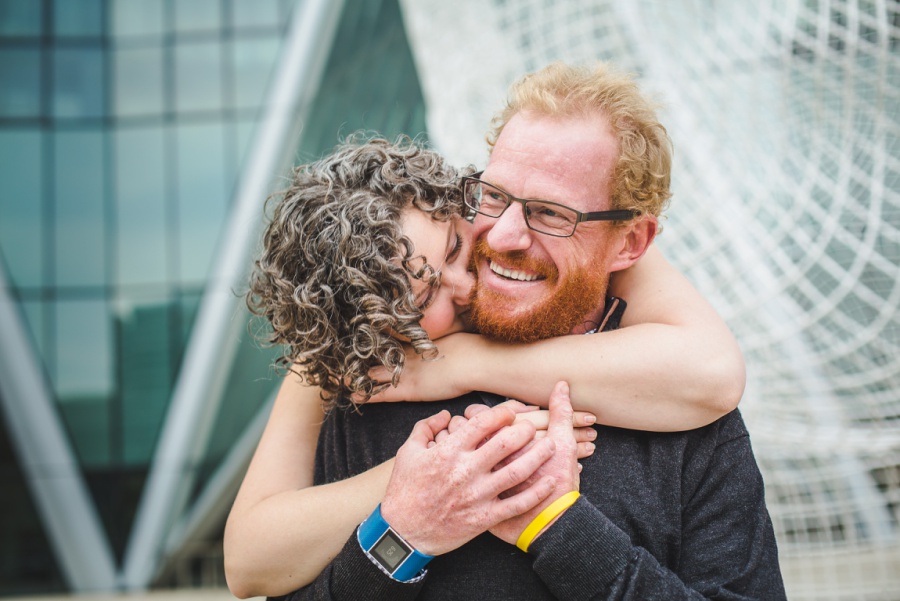 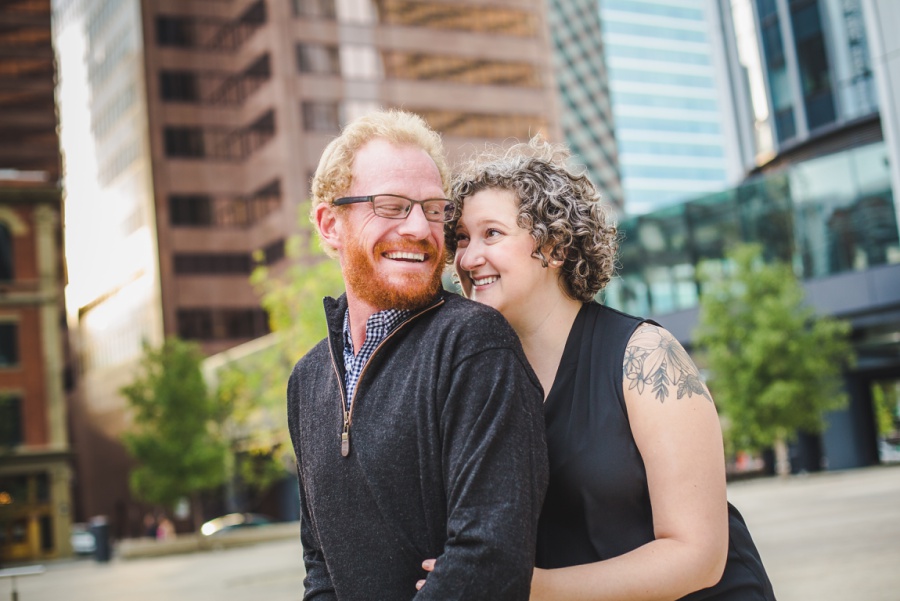 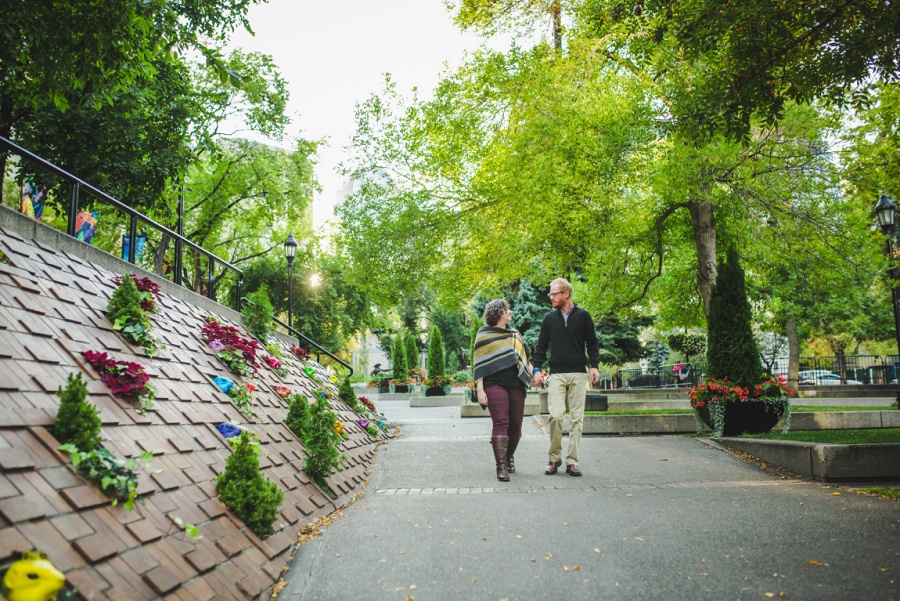 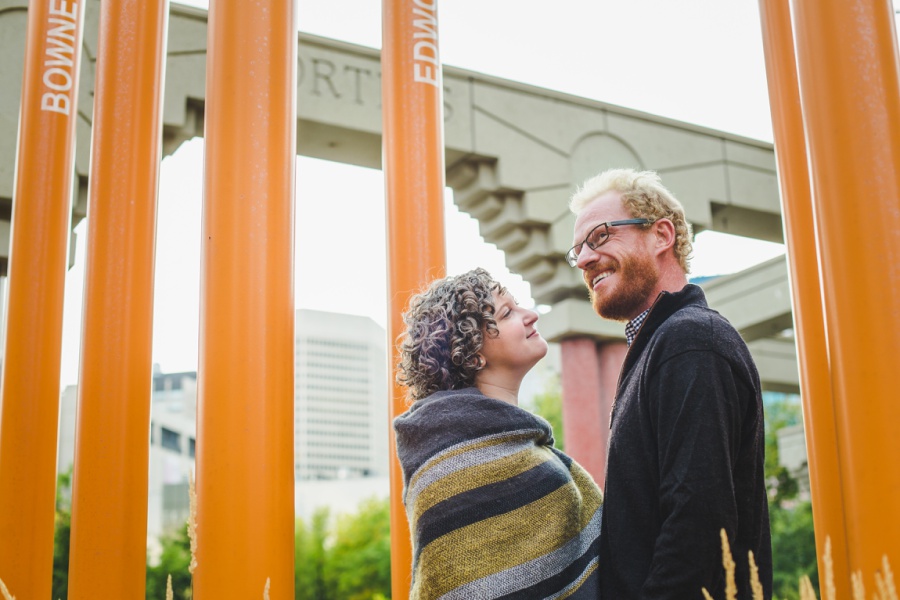 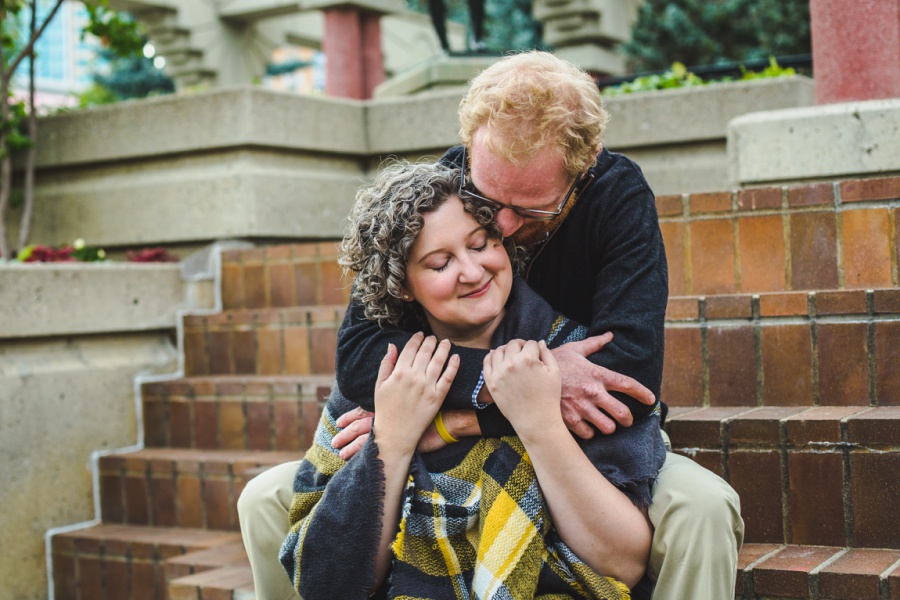 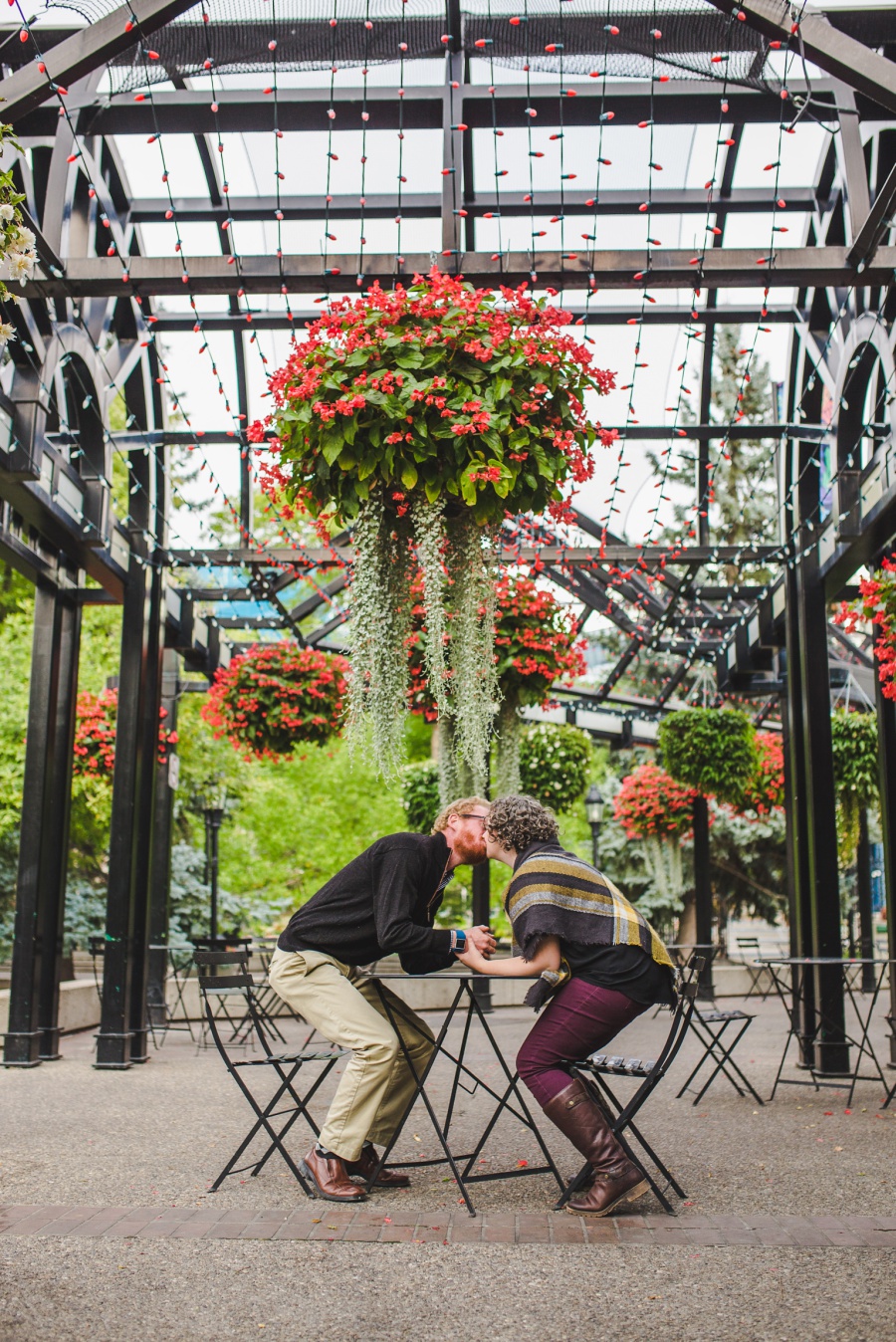 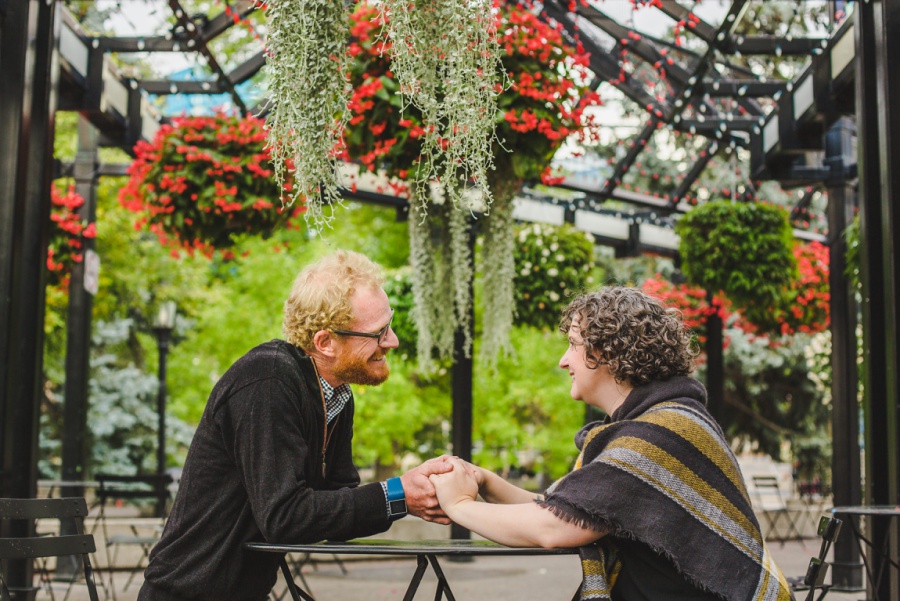 How did you two meet, and what were the initial thoughts or feelings of one another about the other?
Abigail: When I was about 9 my family arranged to do a home exchange with a British family, and we ended up becoming friends. Over the years we got to know more and more of the family, which included the Harwood cousins, but I had never met Luke. Luke’s sister was getting married and so I was sent to represent my family at the wedding, and we met at the rehearsal!
Luke: I had heard about Abigail for years, so I felt like I already knew her, even though we’d never met. When we finally did meet, she was different than I had expected from what my family had told me! She has a beautiful smile and she had so much energy the entire wedding weekend even though she was jet lagged from her flight. Also she had beautiful long curly hair that matched her personality.
Abigail: I had just arrived from Florida that morning, taken a nap and then gone to the rehearsal, so I was a bleary mess. I didn’t know any of the hymns that were going to be sung at the wedding, so I asked Luke if he knew them. He sang them into my ear during the rehearsal and I just didn’t bother telling him that I could sight read! He seemed sweet and funny and kind of goofy, and since he lived in England I didn’t really think much would come of it, but he reached out not long after I had gotten back home and we ended up doing the long-distance thing for 3.5 years before we were able to live together in Calgary 3 years ago. We’ve seen a lot of airports!

Describe your proposal story! Were you surprised?
Abigail & Luke: We laugh when people ask us this, because we had been talking about getting married for a long time but were just waiting for some immigration pieces to fall into place. Once they did, we picked a date and started planning! So it wasn’t so much a proposal as it was a conversation that ended in engagement!

What brings you two together, and what do you enjoy spending time doing together?
Abigail: My dad said something one time when Luke was visiting me at my parents’ house that I think speaks to our relationship. I was doing a strange voice or some kind of odd body movement, and my dad just turned to Luke and said, “She must really like you- she’s not herself with just anyone,” and it honestly made me go, oh, that’s true! I’m not afraid to be me with this person! So I think what brings us together is an honest mutual enjoyment of one another. I just never get tired of being around him!
Luke: I’m just comfortable around her- it’s easy to talk to her. I’m not very good at voicing my feelings but she gets more voice than anyone else! When we’re together we love testing new foods and learning about other cultures, and taking on food experiments at home. We love to travel but for the first few years it was mostly to see each other- now that we’re settled we get to travel for fun!

Describe an event or memory that was significant about one another, and how your feelings or thoughts may have changed/grew as a result.
Abigail: There’s not one specific time that I can point to- instead, I think our whole relationship has been made up of moments where we had to make the conscious choice to be with each other and really put in the effort to make it work. Being long-distance also gave us the chance to grow into ourselves on our own, and really appreciate who the other person was without us. That definitely meant that we had to make adjustments to get used to living in the same place (and together!), but in the end I think there’s a beauty in knowing that we’re not together because we need each other, but because we choose each other.